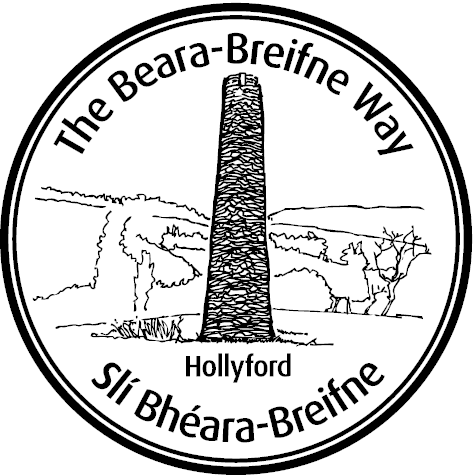 The gushing, gurgling river Multeen flows through the town of Hollyford from the “Sweat House”

Unfortunately, not accessible to the general public, this form of sauna was used in the treatment of rheumatism. It is a small beehive-shaped stone house with a low entrance. A turf fire was lit inside and kept lit until the interior was heated all over. The fire was then extinguished and the patient, wrapped in a blanket, went in and sat down. The entrance was sealed except for an air hole.

After some time the perspiring patient came out and dipped in the stream. The treatment was undoubtedly enhanced by the copper in the water, there are copper mine shafts of the 1800’s in close proximately.

On the right hand side of the village, where two roads meet, stands the former Royal Irish Constabulary (RIC 1836 -1922) barracks, refurbished in the late 1980s as a private dwelling. The road to its right leads to viewing points at Piperhill and Glencarbery beauty spots.

The quarry on the left further on is of scientific interest because of ‘an outcrop of fractured Wenlocklan (Silurian) rock exposed – a rare occurrence in Ireland’. Look out for the sign beside the Metal Bridge in the village, which informs you that this area is the burial place of Éamon an Chnoic/Ned of the Hills. He was murdered in 1724 for the reward on offer for his capture. His head and body were reputedly buried in separate graves, 1840s’ lore pinpointed a site in Curraheen townsland as one of the burial places.

Hollyford is part of the ancestral home of the O’Ryans and forms a stage of the Beara-Breifne Way which is based on the historic march of O’Sullivan Beara in 1603.

To find out more about the route, accommodation or local services, contact the Multeen Way via our contact form, or at: