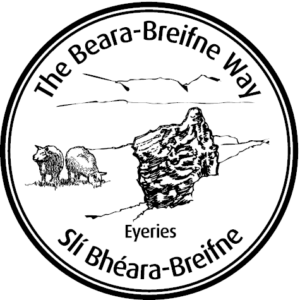 The village is situated on a hill with a view of the islands of Coulagh Bay from its well-placed picnic spot.

Both Eyeries beach and the beach of Travara nearby are safe for swimming and bathing. The network of pretty sideroads where cars are few and far between are another attraction for the walker or cyclist who wants to sample a gentler pace of life.

Another 2km along the same road, there is an oddly shaped rock said to be the petrified remains of the mythological Hag of Beara (An Chailleach Bheara), a Celtic Harvest Goddess who lived for several lifetimes and now turned into a stone, gazes eternally out to sea as she awaits the return of her lover Mannanan Mac Lir

In Eyeries don’t miss the opportunity to purchase handmade, locally designed knitwear in the village. Eyeries is also the home of the award winning Milleen’s cheese. This soft washed rind cheese can be purchased from the makers or in the shops.

Eyeries is part of the ancestral home of the O’Sullivans in Ireland and forms a stage of the Beara-Breifne Way which is based on the historic march of O’Sullivan Beara in 1603.

To find out more about the route, accommodation or local services, contact the Beara Way via our contact form, or at: