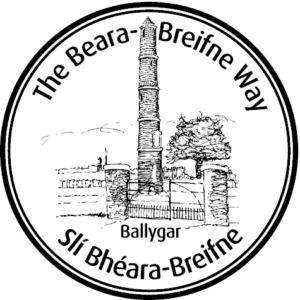 It is serviced with a good bus route, accommodation, post office, bank, shops and a family run hotel. It is famous for its carnival which has been held at the beginning of August for the last 50 years. Ballygar is one of the more modern villages built by the O’Kellys.

In the mid-nineteenth centurym Denis Kelly used the stones form the ruins of the monastic settlement to renovate his castle. Aughrane was originally built in the fourteenth century. It was also the home of the famous author Charles O’Kelly. The O’Kellys belonged to an ancient Irish family who became anglicised.

During the Elizabethan wars, like so many other clans, they divided into two: the Queen O’Kellys and the rebel O’Kellys. An O’Kelly from Aughrim marched with O’Donnell to Kinsale, while the head of the family who lived at Castlekelly served as a captain of foot under the Earl of Clanricarde against the disaffected Irish.

The last of the family was D.H.O’Kelly, he died in 1877. The castle was burnt during the “Troubles”, when a troop of British cavalry had been sent over from Mount-Talbot and used the place for storing hay andforage. In Killeroran cemetery, situated between the rivers Shiven and Such, he commemorated his wives by building a round tower on which there is the following inscription:

“Sacred to the memory of the two wives of D.H.O’Kelly. Both English women, they set themselves to the duties of their Irish house, and lived beloved by high and low and died universally lamented”.

Denis Kelly is buried in a vault in the same cemetery:

“He was a Chieftain of the branch of the O’Kelly’s of Screen and candidate for the Kingship of Hymany. He was an earnest Christian and a kind friend”.

Ballygar is part of the ancestral home of the O’Connors and forms a stage of the Beara-Breifne Way which is based on the historic march of O’Sullivan Beara in 1603.