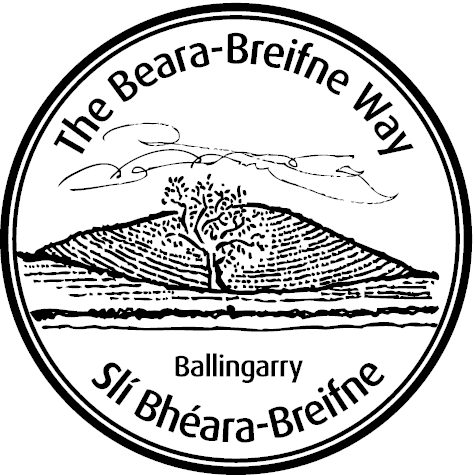 The main geographical feature is an isolated hill called Knockshegowna. It is 701 feet high. From the top of Knockshegowna a guiding light shines down over the locality on Sundays and holidays from a cross erected in 1949.

At one time a castle graced the top of Knockshe hill. In 1856 this was replaced by a watchtower. This tower was unfortunately destroyed by the Big Wind of 1903. Traces of an old road still remain along the high ground through Knockshegowna. This road was the main route connecting Connaught and Munster.

Lough Nahinch, which means lake of the island, derives its name from a crannog on the lake. Our crannog has a special place in the history of Ireland because it was the first crannog to reappear due to drainage which took place in the locality in 1810. Part of the oak platform is visible at the moment.

Sopwell or Kilnlahagha as it was formerly known has many interesting features such as a round tower, a Mass rock, Corn mills, and the renowned Sopwell Hall. This was built in 1745 and was owned by the Trench family. A castle also stands on the grounds which was the chief seat of the Egan clan of Ormond. This castle was built in 1604.

Our only national monument is the Lismacrory Mounds. These are described as prehistoric burial mounds. An ariel view of the locality reveals twenty raths or ring forts. These are circular banks of earth or stone. There is also a fuladh fia close to Lough Nahinch.

Ballingarry is part of the ancestral home of the Kennedys and forms a stage of the Beara-Breifne Way which is based on the historic march of O’Sullivan Beara in 1603.

To find out more about the route, accommodation or local services, contact the Ormond Way via our contact form, or: